Feliks Nowowiejski – Quo Vadis, Dramatic Scenes for Solo Voices, Mixed Choir, Organ and Orchestra, according to a text by Antonie Jüngst, based on the novel by Henryk Sienkiewicz.

The name of Feliks Nowowiejski is practically forgotten now, even though in his time he was an important composer whose work was performed on leading world stages. After its premiere in Amsterdam in 1909, the monumental spiritual cantata Quo Vadis? was performed in more than 150 cities both in Europe and in North and South America, bringing Nowowiejski international fame. The text is based on the novel of the same name by his Polish compatriot, Henryk Sienkiewicz, which tells the story of the life of the first Christians and the cruelty of the Roman Empire during the reign of Emperor Nero. An important fact is that Leoš Janáček highly respected Felix Nowowiejski, he approached him as a judge of composition competitions, and wanted to perform Quo Vadis? himself in Brno in 1910. He took charge of the production as both choirmaster and conductor. However, all his efforts were in vain, as Janáček was not able to put together an orchestra that could handle the demanding score. With this concert, we would like to draw attention to Janáček´s very positive attitude towards Poland – at one point he even considered accepting the post of director of the Warsaw Conservatory. At the same time, after many years, we are fulfilling Janáček´s dream to get this monumental work of Nowowiejski’s heard in Brno. 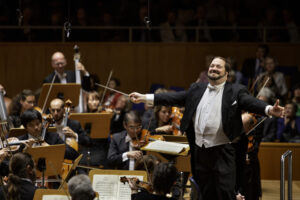